Folks get confused when you are taking about Roth Conversion Ladders, a series of partial Roth conversions, and backdoor Roth IRAs.

Here, we are talking about early retirement, and trying to access your pre-tax retirement money penalty free prior to 59 ½. In order to do so, you have to navigate one of the 5-year Roth IRA rules—the one on conversions. This is a Roth IRA Conversion Ladder.

In order to get your conversions out from a Roth conversion, if you are less than 59 ½, you have to wait 5 years. So, if you retire early and need some of your pre-tax money to fund your retirement before 59 ½, read on! And we will clear up the confusions regarding a Roth conversion ladder vs Roth conversions vs the Backdoor Roth.

I have a whole blog on Modeling a 72(t) in Early Retirement where I compared and contrasted it to the Roth Conversion Ladder. You may want to start there, but the take home message is that you need money in your brokerage account to do a Roth IRA ladder and to live on for 5 years while the ladder seasons. If you don’t have cash/stocks to sell in order to pay the taxes on Roth conversions, you are stuck with the much less flexible 72(t).

Roth ladders are not a backdoor Roth. You do the backdoor Roth contribution because you make too much money to contribute to a Roth IRA directly.

Remember, everyone can contribute 6 or 7k every year to a traditional IRA. This contributions is non-deductible when you file your taxes if you make too much money.

Since you can’t use the regular (or front door) contribution to a Roth, you use the backdoor. So, once you have non-deductible money in your traditional IRA, you convert it to a Roth IRA. Since this money is never deducted (it is after tax), this conversion has no tax liability. Backdoor Roth IRAs are simple if you have no other deductible IRAs, and you figure out form 8606 on your taxes. Generally, you will need to education your CPA about form 8606 too…

The Backdoor Roth is a way to get some tax diversification over the years, especially if both you and your spouse can do it every year.

Roth conversion ladders are not a series of partial Roth conversions. Well, actually they are, but they are done for different indications.

The reason for a Roth IRA conversion ladder: access to pre-tax retirement accounts without a 10% penalty.

Ok, without further ado, let’s look at how you actually model and build a Roth ladder as part of early retirement.

What is a Roth Conversion Ladder from the Mad Fientist?

For posterity’s sake, a Roth conversion ladder for early retirement is popularized by the great Mad Fientist. Mad Fientist has been recording music lately instead of talking early retirement, but the man popularized the idea in his wildly popular early retirement blog and deserves the shout out for the great infographic.

Let’s see how this might look in the real world and model a scenario where a Roth ladder might come in handy.

Above, you can see the Monte Carlo odds aren’t great for this plan. I’ll just tell you that traditional retirement software doesn’t like early retirement. They often give very poor Monte Carlo odds for plans that will work out just fine. Remember, early retirees have a great deal of flexibility and ingenuity. After all, this is a guy who figured out how to save $3M by the time he is 46! Let’s give him some credit and assume he will make better financial decisions than the average bloke in the future.

On the left, the odds are slightly better and he has a little more money by doing the Roth conversion ladder. I do note that more of this money is also after-tax with the Roth ladder as well, so his after-tax wealth at the end of his life is greater with a Roth ladder.

Retirement planning is good for the next 1-2 years, but after that, who knows what returns, inflation and congress will do. Start out with a reasonable plan, and pivot when needed.

Taxes are the main reason to consider a Roth ladder. Avoidance of the 10% penalty on early IRA withdrawals is key, but tax consideration are a close second.

Above, you can see the taxes paid each year with and without a Roth conversion ladder. In green, you have low taxes until 55. At that point, you run out of money in your brokerage account and spike your taxes as you have to fund your expenses entirely from your pre-tax retirement accounts. Of course, during that decade, the IRA (or 401k) has been growing in the background, so you have much larger RMDs over time.

Compare that to the blue, where you do a Roth conversion ladder, forcing yourself to pay higher taxes initially. This process keeps your brokerage account from being decimated, and overtime you are not forced to pull money from your pre-tax retirement accounts. You smooth out your taxes over time and pay $440k less in taxes over the next 35 years.

Let’s look next at effective tax rates over time as well. 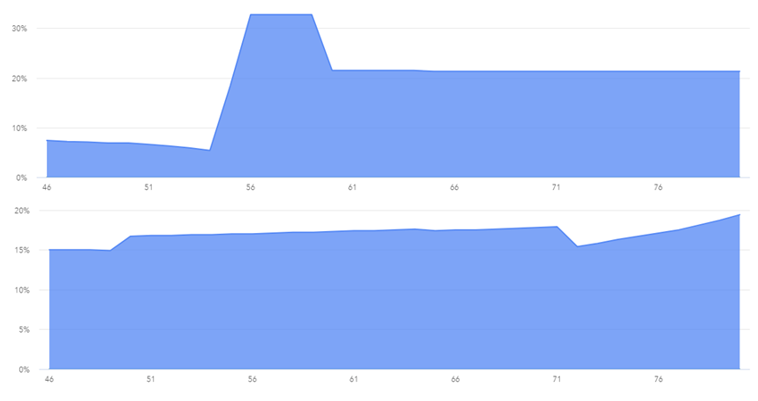 One final graph to look at. Instead of the effective tax rate, let’s look at the marginal tax brackets. This is the plan with the Roth Conversion Ladder. Note he stays under the 22/25% tax bracket his entire life instead of being forced to spike his income later in life up to higher brackets.

Focus on filling up your lower brackets over time to liberate your pre-tax retirement accounts with a lower overall tax liability.

So, the goal in doing a Roth IRA conversion ladder is to fill up the 22% tax bracket until 2025. Then, in 2026, the TCJA expires and the 22% bracket becomes the 25% bracket. Note that since taxes are more expensive then, we don’t focus on filling up the 25% bracket, we just take out enough every year to help pay the bills and to stay out of the next highest tax bracket down the line.

Modeling the Amount to Convert Each Year via a Roth Ladder

So how big are the rungs of the ladder? How much do you need to convert each year?

There are a couple of break points to consider in early retirement. The first is the top of the 12% tax bracket (which becomes 15% in 2026). Since the next highest bracket is 22% (25%) above that, this is a natural break between the brackets where folks with low spending goals in retirement can consider.

More often than not, folks considering a Roth Conversion Ladder in early retirement will be interacting with the 12/15% tax bracket. Note that this guy has $3M in assets and still is only playing around with the 22/25% bracket. Generally it is well to do folks later in life with a limited Tax Planning Window who will get up to the 24/28% tax bracket. Above that, we jump to 32/35 brackets. These brackets are for those for whom anything less than the maximum tax bracket in the future is a win.

Let’s see what conversions modeled above look like via cash flows. Above, you can see how expensive retirement is from the taxable column. In order to pay for living expenses and the extra taxes on the Roth ladder, we need to pull much more than 4% during the first few years. That’s ok. Once we start taking money out of the Roth to live on, that will go down below 4%. We are essentially pre-paying our safe withdrawal rate during the Roth ladder building process.

Next, note the amount of Roth conversions that go in to fill up the 22% tax bracket until 2025. This is converted from the 401k (or more likely an IRA) to the Roth IRA. Then in 2026, note that we continue conversions (money out of the 401k column) but now start a series of partial Roth conversions to control our tax liability long term. This is somewhere in the middle of the 25% tax bracket, and needs to be just enough to “de-bulk” the IRA.

What are “The Numbers” behind a Roth Ladder

Ok, let’s dive deep now and see what the actual number look like for this Roth ladder.

Above you can see the cash inflows and outflows for the next decade. Expenses increase with 2% inflation in this program. Note the planned distributions and the total inflows are the distributions from the Roth account via the Roth ladder. They start 5 years after building the bottom rung of the ladder.

Look at the taxes during the 5 years where the TCJA is still active. Note that we convert less aggressively starting in 2026, so despite the top marginal tax bracket (in this case) going from 22% to 25%, we pay less in taxes.

Net flows decrease after 5 years, and our withdrawal rate gets down below 4%.

It is also important to note- as a rule of thumb as you spend down first from your brokerage account. This means you have less interest and short-term capital gains over time, which allows you to fill your lower brackets with more Roth conversions. This is why, in general, it is useful to spend down your brokerage account early in retirement. Tax drag sucks.

So, what did we learn?

A 72(t) is suited for those folks who don’t have after-tax assets to pay the taxes during the 5-year rung construction of a Roth ladder.

The Backdoor Roth IRA is done if you make too much money to use the front door, but still want to build some tax diversification. A Roth Conversion Ladder and partial Roth conversions are the same thing, but done for different reasons!

Even after you build your Roth Ladder, Partial Roth conversions to de-buck the IRA may still be important.

The tax planning window is massive when you retire early. And, taxes are on sale right now until the TCJA expires. Consider doing a 20- or 30-year tax projection when you retire early to make sure you smooth out your taxes over time. You can access your pre-tax retirement accounts before 59 ½ but you need to have a strategy in place to do so.